Reduction of Deforestation in Brazil

Carbon Footprint | The reduction of deforestation activities in the Amazon rainforest is supported. This is achieved through the management of the land in the form of a "private nature reserve", rigorous monitoring and enforcement. 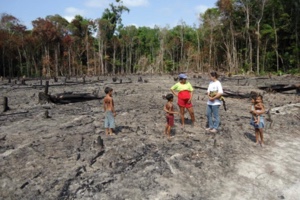 The project is located within the Amazon, the largest remaining rainforest on our planet. The Amazon is known for its amazing biodiversity; home to 10% of all species, including some endangered species that rely on it for their survival. This Portel-Pará REDD project is working to prevent unplanned deforestation in native forests, which has occurred due to logging, squatting and attempts to implement pastures. The project is expected to avoid over 22 million tonnes of carbon dioxide equivalent greenhouse gas emissions over a 40 year period. This will be achieved by managing the land in the form of a "private conservation reserve", through rigorous monitoring and enforcement. From 2012 the project has scaled-up its monitoring activities by employing and properly training local villagers for monitoring and enforcement activities.

The Project Area comprises 177,899.5 Ha in 17 privately owned parcels, or "Glebas", adding up to a total of 194,402.8 Ha in the Portel municipality, located in the Portel micro region. Local population is comprised mainly of settlers known as "Ribeirinhos", who live along the rivers and along the igarap's (small streams). There are no indigenous communities located either in the Project Area.

The project is in an area of extreme importance for biodiversity conservation. According to the Brazilian Ministry of Environment, this area holds a great diversity and abundance of species, not only important for the maintenance of ecological relationships, but also of socio-economic importance such as Brazil nut trees and other noble tree species.